DevOps – is it just a buzz word or you can really do it? We invited three experienced guys to share their experience how they have succeeded with DevOps.

Ilgvars is founder & developer at FinoTech. He’s been working in IT field for more than 15 years and still kind of enjoys it. Things he likes even more: cooking & eating, few sports activities and finally beer.

Daniel is a DevOps Tech lead in Accenture Riga, he moved to Latvia from the UK in July.
Daniel was a part of the founding DevOps team in IBM, Cambridge, where he supported the build and test infrastructure, as well as producing tooling for the development of multiple enterprise level products. Through DevOps practices, Daniel managed to reduce the time it took IBM Cambridges documentation team to produce releasable deliverables from weeks down to a matter of hours.
Daniel worked in IBM for around 5 years, while he was there he took part in a number of patent groups, He is a named inventor on an Intelligent route navigation patent  and has some patents awaiting publish.

Chris is VP of Engineering at SaleMove, where engineers are revolutionizing the online customer experience. Chris began his career working in Silicon Valley and London with Yahoo!. After moving to Tartu, Estonia, he ran a small development firm building systems for Shazam (the worlds most popular music recognition app) (his team designed and built the content ingestion system bringing music, lyrics, and artwork into Shazam).
Recent cool projects his team has been working on:
– Incorporating IBM’s Watson to power recommendations for Sales and Customer Care
– Their customer engagement system recently went live on Tesla.com – You can buy a Tesla or SolarCity solar panels using their system.
When not working, he enjoys scifi literature and keeping his garden weed-free. For the past 4 years, Chris has helped run the Tartu Software Developers Guild.

BTW – we have bag of souvenirs (t-shirts, socks, water bottle, some more) from DevOpsDays Amsterdam 2017. Come, be active and you can be one of happy winners of some of them.

DevOpsDays Riga 2017 Program is mostly published and now is good time to hurry up to get Early Bird tickets before they run out.

Did you know that Tieto Latvia is not only always looking for a new talents but we also run various interest clubs? We are proud of our strategic board games club, motor-bike club, active lifestyle club etc. Join the team!
Send your CV and Motivation letter to darbs@tieto.com .

Did you know that Intexsys is behind online store, which is selling more than 1 000 000 different products?
Intexsys is currently looking for:
– Project Manager – work with largest e-commerce clients and Intexsys talented team
– PHP Developer– as always, all level from Junior to Super-senior are welcome
– Android Developer – work on creating best native Android e-commerce apps
We promise – it will never be boring!

Thanks to our sponsors we are able to make DevClub.lv events and have drinks and snacks:

This site uses Akismet to reduce spam. Learn how your comment data is processed. 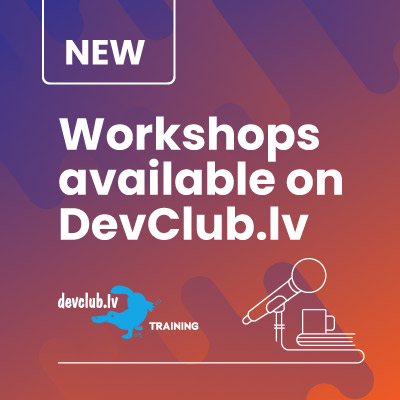